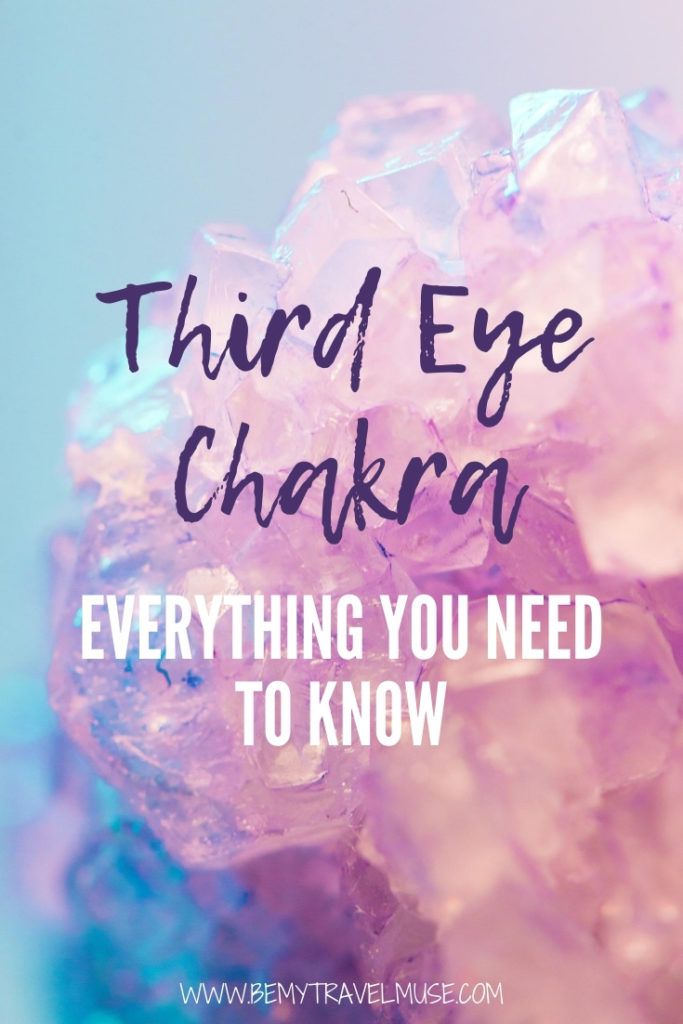 Hi there my beautiful lovelies! Hope you guys are doing well and staying safe. Today, I will share with you information about the Third Eye Chakra or Ajna.

The third eye chakra is the sixth chakra. Located on the forehead, between the eyebrows, it is the center of intuition and foresight. The function of the third eye chakra is driven by the principle of openness and imagination. Most of us have energetic blocks and imbalances as well as energy-sabotaging habits that prevent us from accessing our full vitality, which leads us to feel exhausted, scattered, dull, even ill.

The Third eye chakra is associated with the pineal gland in charge of regulating biorhythms, including sleep and wake time. It’s a gland located in the brain that is a center of attention because of its relationship with the perception and effect of light and altered or “mystical” states of consciousness. It’s positioned close to the optical nerves, and as such, sensitive to visual stimulations and changes in lighting.

Imbalance of this chakra can lead to the feeling of being stuck in the daily grind without being able to look beyond your problems and set a guiding vision for yourself. Overactive third chakra without support from the rest of the chakra system may manifest as fantasies that appear more real than reality, indulgence in psychic fantasies and illusions

The Sanskrit Name of The Third Eye Chakra:

The most common Sanskrit name for the Third eye chakra is “Ajna”, which means “command” and “perceiving”. The third eye or Ajna chakra, is the center where we transcend duality – the duality of a personal “I” separate from the rest of the world, of a personality that exists independently from everything else. Because it connects us with a different way of seeing and perceiving, the third eye chakra’s images are often hard to describe verbally. It puts us in touch with the ineffable and the intangible more closely.

Blue is regarded to be a color of the spirit and it is believed to have a beneficial impact on the body and mind. The blue color is also cooling in nature, therefore it will allow you to feel calmer, more peaceful, and balanced whenever you express yourself. The third eye chakra vibrates with the esoteric, spiritual phenomena that can become available to you once all of the lower chakras are clear and activated. Ajna brings a deeper understanding of things; insights and connections that are always there but not always sensed.

The image of the third eye chakra symbol contains two elements frequently associated with wisdom: the upside-down triangle and the lotus flower. The symbol of the third eye chakra shown with a white moon, six faces, and six arms holding a book, a skull, a drum, and a rosary while making the gestures associated with granting boons and dispelling fears. The downward-pointing triangle above her contains a white lingam. This triangle, along with the lotus flower, can represent wisdom.

To tap into the wisdom and power of your intuition, use the mudra of the great head to channel deep into your third-eye chakra. Take your right hand just in front of the space between your eyebrows and curl the ring finger into your palm. Bring the tips of the thumb, middle finger, and index finger to touch, and keep the pinky finger extended long. Place the tips of the three fingers that are touching to your third-eye focal point. The left hand can remain on top of the left thigh, palm face-up, or in Gyan mudra.

Another key mudra that works to activate and open the third eye chakra is Gyan mudra, the mudra of wisdom and knowledge that cultivates a sense of clarity and insight and works to open and balance this chakra. To form this mudra, bring the tips of the thumb and first finger to touch. Gyan or Gyana is a Sanskrit word that refers to ‘Knowledge’ or ‘Wisdom’ & mudra means ‘Gesture’ or ‘Symbol’.

The mantra associated with the third eye chakra is a classic: aum (or om). This is the sound of the universe. Affirmations in English include. I trust my intuition. I care for my spirit. Om or Aum is a sacred sound and a spiritual symbol in Indian religions. It signifies the essence of the ultimate reality, consciousness, or Atman. More broadly, it is a syllable that is chanted either independently or before a spiritual recitation in Hinduism, Buddhism, and Jainism.

My dear lovelies! I would love to hear your impression on this chakra and what are you doing to balance your throat chakra? Please comment below at the end of this page.