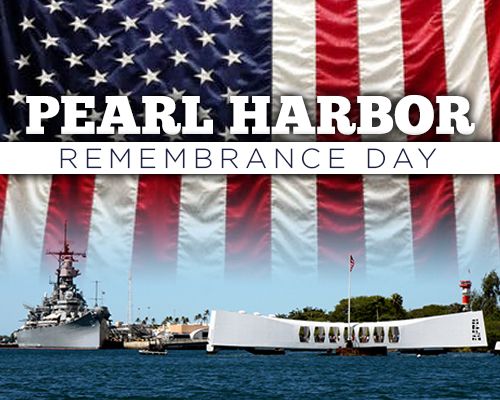 Hi there my beautiful lovelies! Hope you guys are doing well and staying safe. Today is Pearl Harbor Day. Today, we honor those heroes who lost their lives to a horrific attack 79 years ago.

What Happened 79 Years Ago at Pearl Harbor?

On December 7, 1941, hundreds of Japanese planes made a surprise raid on Pearl Harbor. During the attack, which was launched from aircraft carriers, nearly 20 American naval vessels, including eight battleships, were damaged or destroyed, as well as more than 300 aircraft, according to the History Channel. Fortunately for the United States, all three Pacific fleet carriers were out at sea on training maneuvers.

The official American death toll was 2,403, according to the Pearl Harbor Visitors Bureau, including 2,008 Navy personnel, 109 Marines, 218 Army service members, and 68 civilians. Of the dead, 1,177 were from the USS Arizona, the wreckage of which now serves as the main memorial to the incident. Fifty-five Japanese soldiers also were killed.

Until the raid, the U.S. had been reluctant to join World War II, which had started on Sept. 1, 1939, after Germany invaded Poland. The United States was a neutral country.

In those nearly 2 1/2 years, the U.S. had extensively assisted the United Kingdom, virtually the sole source of resistance to the Nazis in Europe, with arms and other supplies. However, the goal of isolationism – brought on, according to the State Department’s Office of the Historian, by the Great Depression and the memory of massive losses during World War I – led Roosevelt and Congress to be wary of intervention. However, the Pearl Harbor attacked led to the United States’ entry into the war.

The day after Pearl Harbor was bombed, President Roosevelt appeared before a joint session of Congress and declared, “Yesterday, December 7, 1941–a date which will live in infamy–the United States of America was suddenly and deliberately attacked by naval and air forces of the Empire of Japan.” After a brief and forceful speech, he asked Congress to approve a resolution recognizing the state of war between the United States and Japan.

My dear lovelies! I learned about the Pearl Harbor attack in school. However, I did not realize the true impact of the attack until my visit to the Pearl Harbor Memorial last year. I have been to so many memorials but never have been so saddened until I visited the memorial in Oahu, Hawaii. I had goosebumps and could not stop but cry. Looking down on that sunken USS Arizona I could not do anything but cry for the 1,400 brave souls resting in that sunken ship forever.

My dear friends! If you thought 9/11 or Pearl Harbor was horrific, imagine this: almost the same numbers of Americans are dying every day due to COVID-19. Every day is a Pearl Harbor day for us due to the coronavirus. Think about it. So many lives are at stake that we all have to make a shared sacrifice to survive the winter: wear a mask, social distance, wash hands often and avoid any form of social gathering outside your immediate household.